Need for a Clergy Union, part 73

many pastors may not know that our brothers and sisters to the north of us have a union for clergy, no foolin'.
but some of you will ask, but why would we ever need a union? personally, i do not. the good folk at Judson Memorial Baptist Church treat me great.  but one cannot define the world solely by their experience.  we are brothers and sisters of the spoken word.


so have a look-see at what a church around the corner is doing to their pastor for easter: six back-to-back services, six back-to-back times he has to announce Christ is Risen (i cant help but think by the third time it seems a little melodramatic), not to mention when does the dude even get to go to the bathroom? 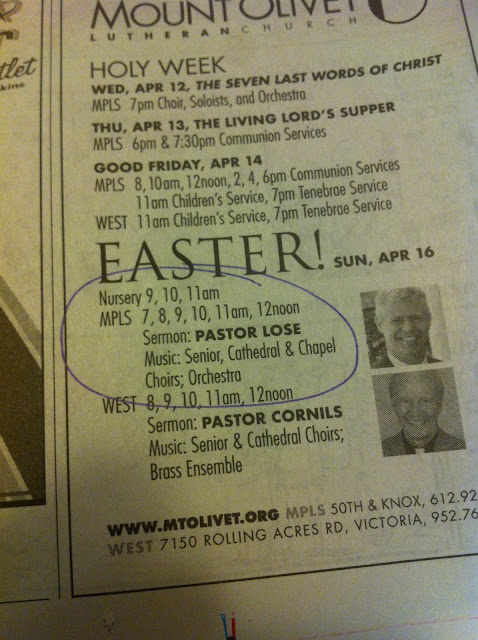 As a kid I was a sucker for any free toy in a box of cereal.  I especially loved the free bike license plates that came in a box of Honeycomb (you can buy them on ebay, of course).  Of course other classmates in elementary school were able to get license plates with their names on it at Kmart, but Travis was never to be found on the rack of license plate names (Tracy, but never Travis).  Nevertheless, I happily placed a state of Colorado license plate on my Schwinn and rode around town. Of course, no one ever asked me if I was from Colorado or anything about Colorado.  If someone had asked me anything about the state I would have looked at them like they had three ears or pedaled home as fast I could convinced they were trying to kidnap me.

Some of you may know that for the past couple of years I have had a CLERGY auto license plate on my bicycle.  For the record I totally swiped this idea off of Rev. Laura Everett, Executive Director of the Massachusetts Council of Churches.  I just had to have one of my own.  First I called Judson Press (publishing arm of the American Baptist Churches, USA) to see if they carried any CLERGY license plates, they did not.  Then I scoured the internet and found two places: the Methodist shop (aka Cokebury) and the UCC shop (aptly named UCC Resources).  Interestingly, Cokesbury no longer carries the license plate but they do carry a window decal, a "clergy" auto tag holder, and a "clergy" auto rearview hanger.  The UCC shop has them for $10.00.  I purchased one from the UCC shop, but seeing that the UCC one, rightly so, had the UCC logo I went over to the American Baptist Churches, USA resources page and downloaded an ABC,USA logo and taped it over the UCC logo.

Okay reader, go ahead and catch your breath and give your heart a chance to settle down, I know that was pretty damn exciting.

The auto license plate served me well.  But I really wanted a bike specific clergy license plate.  Sure enough thanks to the wonders of the information superhighway there is a company that manufactures personalized bicycle license plates.  And sure enough, I ordered one; for $10. 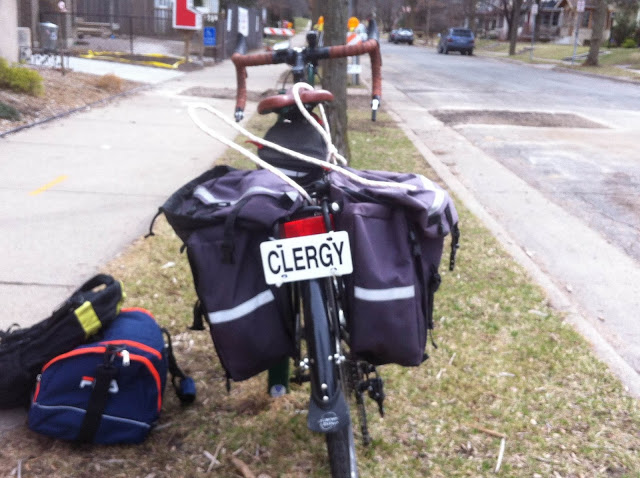 you notice my bag to the left of the bike, I just got back from playing basketball; so consider this an action shot as well.
Posted by G. Travis Norvell at 2:15 PM No comments:

Now that the first pitch has been tossed, 30DaysofBiking is well under way, liberal solicitors are blanketing south Minneapolis neighborhoods, and pastry shops are jumping the gun by serving rhubarb treats it is time to do a review of the winter biking season.

1.  The Bike.  This year I dedicated the Breezer as a winter biking only bike.  This decision worked out well.  Last weekend I simply took the bike (studded tires and all) and placed it in the basement till it snows again.  However, due to climate change the snow is not like the snow of yore.  Several times I had a presbyterian of a time navigating the wet chunky snow.  Despite low pressure tires with studs I could barely remain upright.  So I may be in the fat tire bike market.

I am having a difficult time even thinking about purchasing a fat tire bike.  Why?  Shortly after moving to Minneapolis the kiddos and I were walking around the lake when some jackass on a fat tire bike came rumbling through.  The dude was drunk and zigzagging all over the path and cursing at everyone within 10 feet of him.  That was the first time I had ever seen a fat tire bike, never mind someone riding one.  So forever in my mind, even though since that experience I've met many kind hearted compassionate souls who ride fat tire bikes, every time I see someone on a fat tire bike I have a difficult time not saying, "shut up jack ass."

2.  Gear.  Three big advances this year.
1.  An Endura jacket (one with a built in light on the back).  This jacket was (and is) amazing.  One person told me that it was so bright I looked like I was on fire.  Yeah, it's bright.  And it is Scottish made so the zipper is on the opposite side.
2.  A Buff.  I was skeptical of anything called a buff, but this sleeve shirt looking thing is quite amazing as well.  Thanks to the good folk over at The Road Less Pedaled for this recommendation.  Then finally 3. A fleece lined beanie.  Again I was skeptical of anything that resembles a condom but I was quite surprised.  A gentleman over at The Hub recommended a beanie + a ear band + the Buff as three layers for winter biking.  Yeah, it worked amazing.  Because I had three layers I could adjust due to the temperature/wind.

3.  The 46th St. Station.  I was surprised how much I used this station this winter.  Several times I biked over to the station then put my bike either on the bus or the light rail to get me to where I needed to go.

Posted by G. Travis Norvell at 3:40 PM No comments:

This year April 1st fell on a Saturday which meant I could participate in the kickoff ride for 30 Days of Biking.  What a day for it.  Sunshine, blue skies, temp in the 60s, and my lovely and talented bride by my side for the ride!

And since I was at the ride I delivered the bike blessing in person, no foolin'.  I modeled it after a Celtic ship blessing.

What can befall you?
Check your brakes, oil your chain, pump up your tires.

What can cause you anxiety?
Watch our for cars, potholes, and thrill seeking squirrels!

What can tempt thee?
It's not a contest, dress appropriately (or not), you can do this. 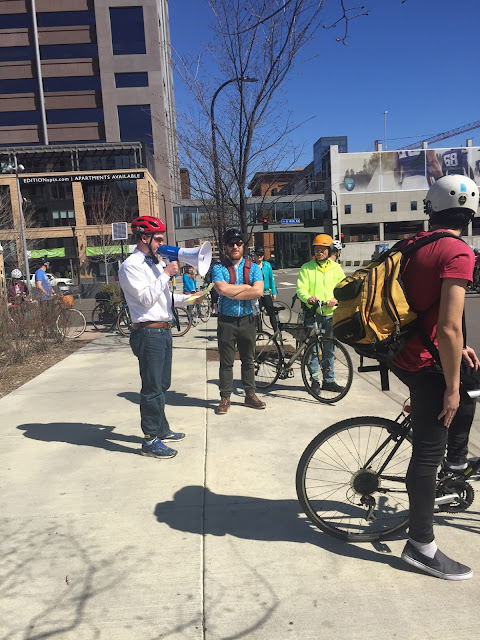 (rarely does a preacher get an action shot)

I thought long and hard about wearing a clerical collar for this blessing, but then I discovered the bike bow tie by BeauTiesltd.com, it was no contest.  bow tie it was. 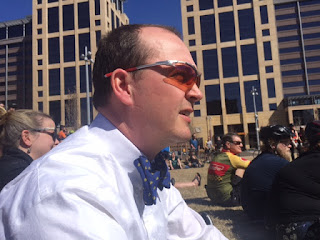 Happy 30 Days of Biking Everyone...