Im Officially a Jackass, maybe, or at least i have the potential to be one; er, i may need your help...

Shortly after arriving in Minneapolis, six years ago, I began my on-going experiment of biking most of the time for my job as a pastor.  That first winter was a doozy, it was dubbed "The Polar Vortex."  I learned tons about winter biking (and survival).  I loved riding on the ice with studded tires, I loved riding in the silence, I loved riding in the winter.  But there were times when I wished I had wider tires for the deep snow, for the slushy stuff, for trail riding...

The following summer after watching a friend complete his triathlon over at Lake Nokomis the kiddos and I were strolling home when all of sudden I heard this loud rumble.  The noise got closer and closer until I realized it was a bicycle.  Not just any bicycle but a fat tire bicycle.  Some idjit had winter/aggressive trail tires on oversized tires and was pedaling them on a paved bike trail.

Okay back to the dude on the fat tire bike.  I had not seen a fat tire bike up close until that fateful summer day.  I was amazed at the setup but the dude on the bike was drunk, was cursing at folk who were walking on the bike path (due to the tri the paths were confusing), and was just being a flat out jack ass.  Ever since then in my mind I have equated: Fat Tire Bike = Jackass.

Over the past few years I have come close plenty of times to purchasing a fat tire bike.  Last winter I even tested many models during the winter expo down on the Midtown Greenway.  i even did something on a fat tire bike I had not done since I was in college: wrecked and rolled down the hill.  But each time I nearly buy one of these bikes I think back to that jackass cursing and swerving around Lake Nokomis.  And I just couldn't purchase the bike.

But then this week I did it.  i purchased a fat tire bike.  i hope im not on track to being a jackass, but one never knows.  That summer i saw that jackass cursing and swerving around Lake Nokomis I confess that before I saw him up close I was taken back to 1995 when I wrote in my journal about my dream vehicle: a CJ-7 Jeep with a 305ci engine, dual exhaust, hard top, and the gnarliest tires I could find.  Lucky for me I was dirt poor and could not afford this vehicle.  But if i had had the funds then I would have been just like the Lake Nokomis dude (sans drunk and cursing) riding down a paved road (MacCorkle Ave in my hometown) and making a ruckus of noise.

Friends, make sure when you see me pedaling around town this winter to say to me: "Travis, dont be a jackass."
Posted by G. Travis Norvell at 7:57 AM No comments:

Hey What Happened at Judson on Sunday?

What happened at Judson last Sunday, glad you asked.

It was another great Sunday.  We had a special guest: violinist Karen Thomas!  She accompanied Jim on the piano with Morning Has Broken and Simple Gifts

Call to worship was loosely based on Chance the Rapper's song Blessings.

Question of the Day: When was the last time you were lost?

We sang This Little Light of Mine and Hush, Hush Somebody's Calling My Name and The Summons (which is my favorite hymn, plus with the violinist I was taken to the third heaven and someone even almost came forward they were so moved by it and I think we even did a better job than First-Plymouth! but they do an amazing job...
The choir offered Dear Refuge of My Weary Soul and Take My Life

The Lessons were a selection from Upstream by Mary Oliver and Luke 9:1-6.

I offered a pretty good sermon, IMHO, Finding Our Way


But my favorite part of the service was the bulletin cover.  A few months ago someone found a treasure trove of old Judson photos.  This being the 109th anniversary week of Judson we chose to share some of them on the front cover.  This one, The Deaconnesses of 1930 is my favorite. 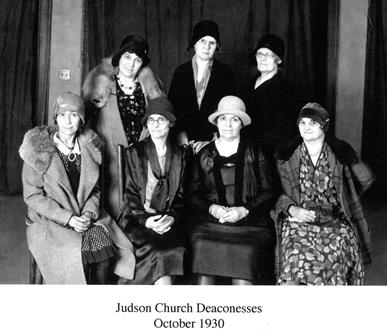 After Adult Education (Legacy Giving) a few of us went on a mini-pilgrimage to the corner of 38th St. and Harriet Ave. (the original site of Judson Chapel).  Then we headed east to Funky Grits.  What an amazing restaurant.  Then we stopped by the Arthur and Edith Lee House and learned of its history and then toured some Tilsenbilt Homes.

Posted by G. Travis Norvell at 2:07 PM No comments: